Have we got some books for you! And some authors too!!

Looking for a good science book? Go straight to Sci/Why, a group blog by Canadian kids' science writers for your science fix. 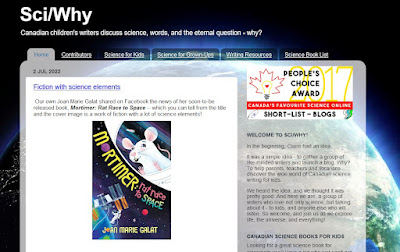 The blog was launched in 2011 by a few writers (including me) who wrote science books and articles mainly or partly for kids. Our idea was to help Canadian kids, parents, teachers, librarians -- and even scientists -- find us, their science-writing home team.

Since then, more than eleven years ago, the blog team has shifted and changed, people have joined it and left and some have come back again. Some of us who were there at the beginning are still there. We promote our own books and each other's books, but mainly we just write short pieces about whatever our current scientific fascination is.

And the current fascinations can be....well....fascinating. Way back in the first year of the blog, Judy Wearing explained why Santa's hair is white. In 2012, Jan Thornhill explained why slime molds make her happy. More recently, Kiron Mukherjee talked about the importance of representation and diversity in science and elsewhere -- and about his mother's loving quest, long ago, to find a brown Cabbage Patch doll just for him. 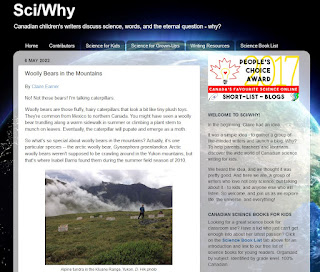 Claire Eamer is an award-winning author of children's nonfiction books, mainly about science and history. She also writes articles for magazines and newspapers, fiction, and even picture books.

Claire's books can be purchased through most bookstores or directly from the author. Contact her at EamerWriter (at) gmail.com for a price list and order form.

You can also find Claire at: